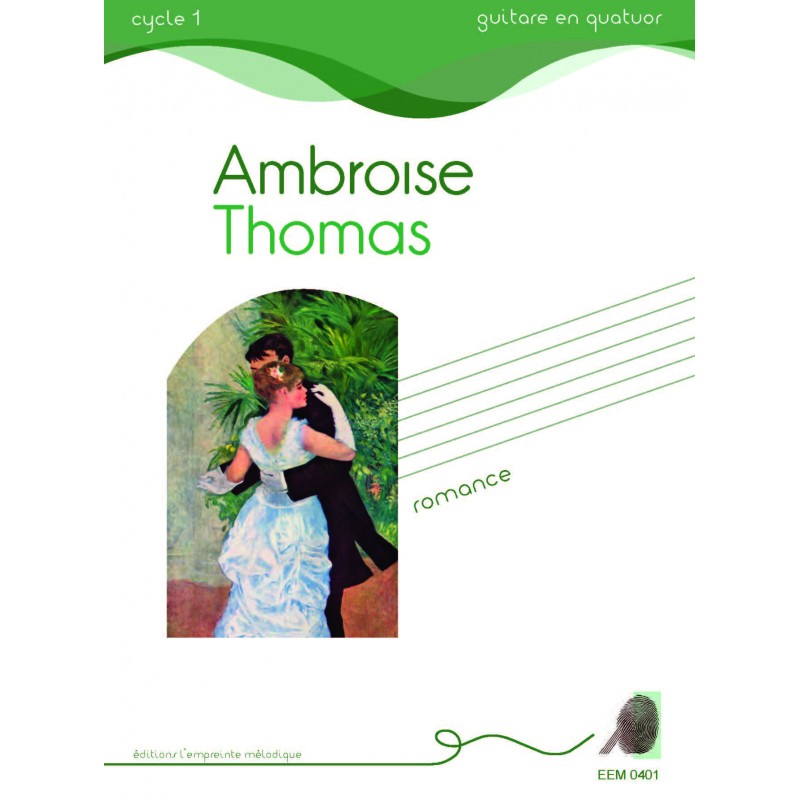 ROMANCE for guitar quartet by Ambroise Thomas
Arr. by Marie-Caroline Foussier
Editions l'Empreinte Mélodique. 4pp plus parts
I always like to go back to the original when l'm reviewing a transcription or arrangement, but tracking this one down defeated me, as there's no clue whether it's part of a longer suite or a song, or a string quartet. But not to worry, this isn't about keeping the transcription faithful to the original; this is about making it accessible.
And accessible it is, it's short and entirely in the first position (though the French footnote does suggest taking Guitar One up an octave; to do that in one's head would need a lot more skill than level of the rest of the ensemble, hence they kindly include
a typeset copy on the back of the standard part, all re-fingered appropriately- a nice touch).
The fastest part of Guitar One has extensive right hand fingering, and to be honest l'm not sure that it helps all that much - there were a couple of places I'd have dispensed with the ring finger for players of the ability this is destined for - at speed, less choice is more.
Being constrained to first position means that there's not a lot of space between the bass and the tune, and some of the harmonies are a little on the gruff side as the tenor part is pushed rather close to the bass note. The bass part alternates between minims and 'crotchet + rest' and l'm not totaliy convinced that there's a systematic approach at work here.
This is not a spectacular piece, and neither is the harmony ali that sophisticated, but that's also part of its charm - it has an amount of freshness precisely because it isn't one of the hackneyed and overplayed standards, and yet it has the simple construction of music from this era.
This is a fairly new publisher, and they are seemingly specialising in easy music. We were all learners once, and good, accessible (and nicely typeset) music matters all the more if a learner is going to get captivated by our instrument.
Derek Hasted