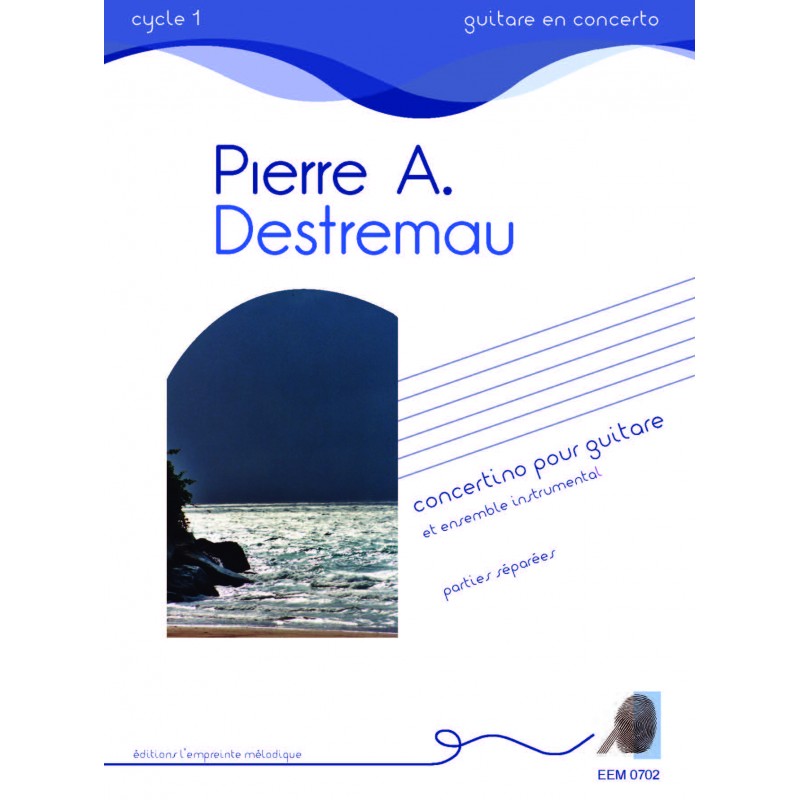 Adapted to pupils of cycle 1 and 2

Very playful, this concertino allows pupils to approach the directory of chamber music with a concerto

from the end of the cycle 1.

CONCERTINO for guitar and ensemble
by Pierre A Destremau
Editions l'Empreinte Mélodique. 12pp plus parts
Sitting on my desk is a conductor's score, and parts for guitar, flute, violin, viola, 'cello and piano.
The first movement, Allegro Giocoso, took my breath away. It wasn't what I expected at all; for ali the wrong reasons. It was trivial, so simple that a guitarist with one or two years' experience would think was a study by Carulli. Nothing in the edition
explained what was going on - what on earth is this piece? Fortunately the publisher's website does at least explain that it is indeed for novices.
So let's temporarily replace any thoughts about concerti and replace them with thoughts about a school concert and a little suite of three pieces in the form of a mini-concerto.
At once, the edition makes sense - a chance to experience some of the aspects of a concerto while still learning.
So the first movement, the allegro in G, has a simple pleasing melody, developed only a little, and passed around from instrument to instrument. Guitar-wise, there is little that's not in thefirst position, apart from a few bars in V position and a little foray (all comprehensively fingered) up to VII in a little diatonic scale. Ali rather straight forward, but some of the phrases end up sounding little 'twee'. Mind you, novice musicians on all the parts will love to experience the textures that this piece offers.
The slow movement, Adagio, in C gives the guitarist a chance to mix quavers and triplet quavers, and some sympathetic writing including pizzicato strings makes for a rather lovely texture. A little grey cloud in my blue sky is when the guitar has a little bit of that rather tedious fast arpeggio 'stuffing' that provides the busyness behind other instruments' turns with the melody. Again, the melody is repetitive, and much of the accompaniment is repeats of static constructions, but therein comes a lot of sound for not too much effort.
The third movement, marked 'Vivace', sets off without the guitarist, but his turn at the primary melody comes soon enough, interspersed with some six-string first position chords in familiar shapes. A little bit of 8va writing takes us onto the body, though the fingering is ambiguous and a wrong decision up there early on may not become apparent till a few bars on. Up in VII a small barré makes an appearance too.
Bear in mind that the first movement is easier than the following two, but even the tougher final movement is perhaps only Grade 4, and the first movement a lot easier.
Fingering is by Arnaud Sans, and the edition deserves looking at by anyone teaching in schools.
Derek Hasted