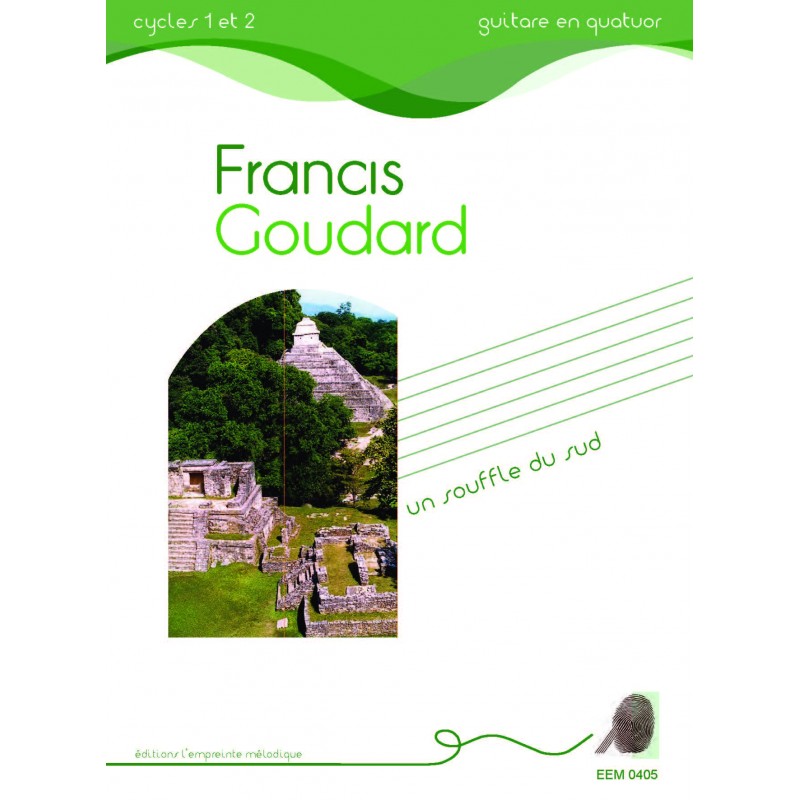 This  charming edition  has  a comprehensive glos­sary  of standard musical terms  at  the  back,  and more explanation of performance rnarkings on the score itself. The cynic might wonder the worth of including terms in  the Glossary  like  'Rall',  but they are  only translated from ltalian to French.
What do we have? A very accessible quartet, but one  that  incorporates performance techniques normally  only  found  in more  complicated works. We have  that  lovely shimmering brushing  of the strings, pizzicato,  harmonies, ponti and  tasto, tambor,  glissandi. And this  makes  for some interesting  textures for not too much effort. Opening  in E  minor,  there is a   pleasing  recurring  chord sequence that  incorporates elements of major and minor. This moves on to support a simple  and pleasing  melodie phrase and  sees Guitar Three  go high up the neck in a very easy to play accompaniment.
The  notation is  clear  and  straightforward, but not  without sorme  quirks. Set  in  3/4 tirne,  some­ times the bar is  split  into  two  dotted   crotchets, and  sometimes  into  a dotted  crotchet and  a quaver tied  to a crotchet. Sometirnes  a trailing three quavers are bearned  in a single  beam,  other  times they are  not.  But  generally speaking, the  score  is clear and the fingering very helpful, especially for players  of modest  experience. Unfortunately, the music  has  ended  up with two difficult  page turns for each  part,  and  the  fairly  constant density in the musical texture means  that  there  really aren't better  places to turn, so some ensembles may well want   to  consider four  sheets of  music   side-by­ side. The strong and  clear  melodies  are  pleasing  and although there  are  some  little  tongue-twisters in the  rhythms,  the  piece  has  a  well-defined  meter and  should be easy to keep synchronised.
This is one of a slowly-growing range of pieces specifically  written   at  a  modest  standard,  and  I think it is the accessibility coupled with some interesting  effects that  make  this  piece stand out  from the crowd.
In terms of playing complexity, it's probably  man­ ageable by a Grade 4-5 ensemble but,  as with all ensemble  music,   it's  good  to  have  a  little  extra musical maturity and  some spare  technical horse­ power so that  the music  stays untangled.I think  this  is  rather special,  combining  strong melody and  lots of interesting teaching points.