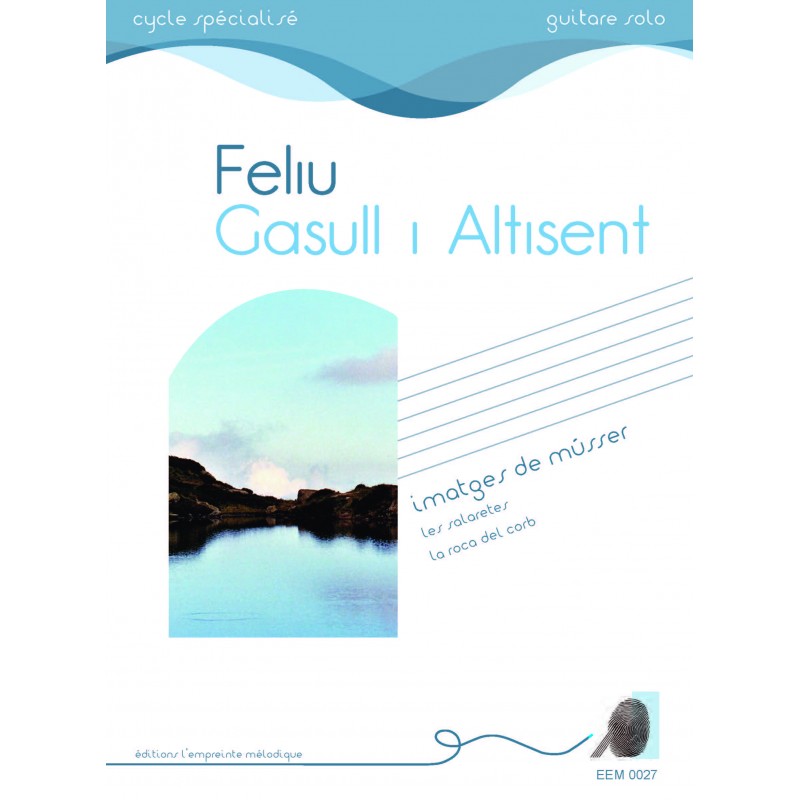 Gasull is  a guitarist/ composer, born in  Barcelona in  1959 and   is  here   represented in  a pairing of pieces   both    in   unusual  tunings.  The   first   Les Salaretes, is  from  6th  string to  1st,   tuned as  fol­ lows: C#, G#, D, F#, BandE, and  therefore players used  to Renaissance Lute  tuning will have  the  top four  strings instantly  recognisable whilst the  rest will  only  have   three strings out   of  six.  Also  the music is written as  normal but,  where appropriate on  two  staves, treble and  bass clef,  so  the  actual look of the  piece is instantly a little  unnerving. The piece,  as  often  with  modern works has a multitude of tempi (six on the first  page of eight  bars). a whole host  of time  signature changes (eight  on  the  first pages, with  no  two  bars the  same)   and  a general appearance of immense difficulty. The  struggle to actually play the  notes on the  correct strings at the correct frets is enough to make you  realise that the actual piece  can  in  no way  be  played  without, one might  say,  a disproportionate time allowed  working it all out.  Perhaps a recording of the  work  present­ ed  with  the  book  might   have  been   the  way  to  go here,  because it takes a player  of considerable met­ tle to put  in the  necessary hours to get their hands round this work,  without knowing how it will come out  at the  other end.

on two staves, and  is marked con brio e senza rubato. At least this piece  doesn't, at first  glance, look quite as  daunting as  the  fust but  again, the  scor­ datura is a major stumbling block.  The  dance-like nature of this final  piece  hides a very modern har­monie  structure which   may  put  off many players and   again would  benefit from a  performance to hear  along  with  the  score as, along  with  the first piece,  the  pair are  considerable works that demand attention but  will only  get  minimal viewings  when the  initial look of the  pieces, and  the  unusual scor­datura will deter the  greater majority of players.